( As per the Francis E. Walter Reservoir Recreation Operations Plan for 2019)

The plan, developed in partnership with Pennsylvania Fish and Boat Commission, and the Department of Conservation and Natural Resources, lists dates and release amounts for whitewater and fisheries releases for the 2018 recreation season. Water will again be allocated to ensure whitewater releases from July to late August and fisheries releases from July to early September.  Seasonal precipitation and water accumulation will be used for releases later in the season (late August through mid-October).

May 19
October  as provide by end of year release around weekend of Oct. 12-13

The White Water Release Schedule  includes 24 dates .  All other dates during the recreation season until the weekend of October 12, 13 have a planned fisheries augmentation release of at least 50 cubic feet per second if sufficient water is available.
May 11,
May 18

Aug 31*, Sept 1*,
October as provided by end of year release around weekend of Oct. 12-13**
* Dependent on additional water accumulation in reservoir.
**The October 12-13 release is intended to provide a means of releasing any excess water that may have accumulated during the recreation season. This is the last added increment for the 2019 recreation plan.

upon precipitation and water accumulation.  All dates are dependent on hydrologic conditions and the absence of the need for flood control operations.

DATES AND TIMES ARE APPROXIMATE !!

Well, the streams are still on the low side. The little rain we had did not affect the streams at all. The fishing has still been pretty decent even with the low flowes.  So don't guess, instead get out and enjoy the streams. There are loads of fish still in our waters waiting to be caught.  Slate Drakes, Caddis and BWO"s have been working for surface flies. General nymph patterns have also been catching lots of fish. Don't forget to bring your streamer box along on you next time out. The streamer bite is really in full swing. Francis E. Walter Dam had there last scheduled release this past weekend. The lake level now is being dropped to the winter time lake level which is 1300ft. Steelhead seasons is just starting with reports of steelhead in Lake Ontario's east side tribs. There has been a few steelhead and lake run browns caught from the Salmon river. The western Lake Ontario tribs is just starting with salmon being reported at the dam on the Oak Orchard river but most other trips in that area are low. Any new precipatation will bring the flows up increase fish movement.

Remember Rule #4 ,,,,
"There is no such thing as too much equipment!!
Stop by and "hook" into some great deals!!

(Dates subject to change without notice) 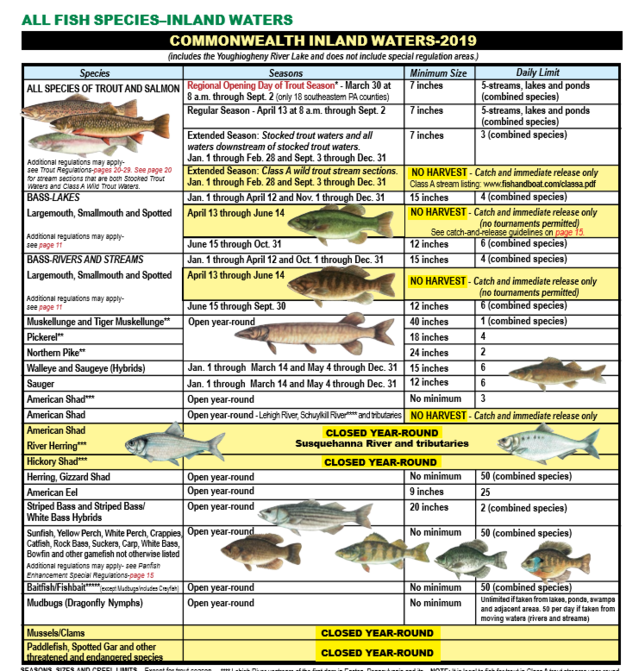 THERE ARE 2 OPENING DAYS OF TROUT FISHING IN PENNSYLVANIA

FISH-FOR-FREE DAYS
TO BE ANNOUNCED

Land your trout quickly to lessen the stress.  If really warm  conditions exist,